Kasich said during a keynote presentation at AHIP's 2022 conference that the payer industry's muscle gives it the ability to bring stakeholders together to drive critical collaboration on health equity. That includes providers, policymakers, physicians and community leaders, he said.

"You ought to be the leader in that you have the data," Kasich said. "This would be such a great thing for people in our country who have been excluded from the power they ought to have."

Uninsured rate drops for all races in Ohio, with biggest reduction among Asian and Black Ohioans 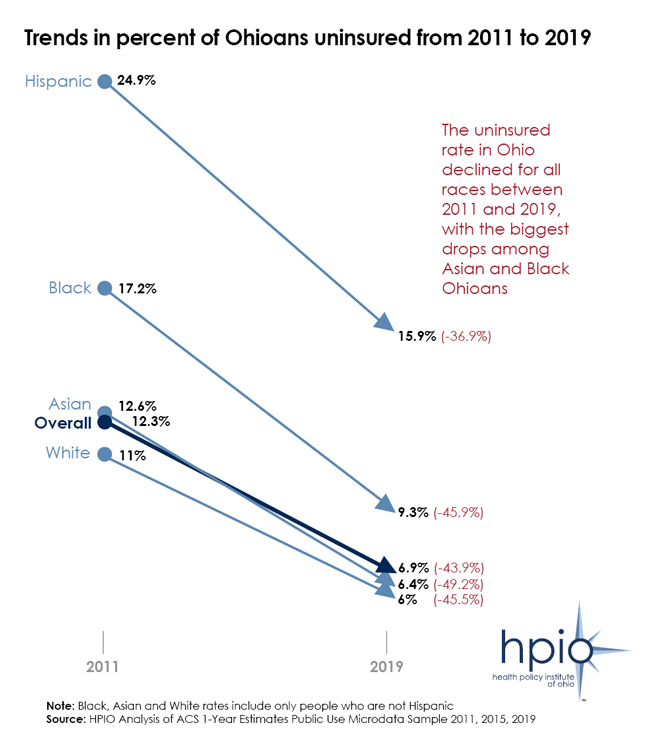 Every race saw a drop in the percent of uninsured, with the percentage of Asian and Black Ohioans dropping most dramatically compared to other groups. Despite these gains in access, however, Ohioans of color are still more likely to be uninsured than white Ohioans.

Much of the drop in Ohio’s uninsured population is attributable to the state’s 2014 decision to expand Medicaid eligibility as part of the Affordable Care Act. In HPIO’s 2021 Health Value Dashboard™, Ohio ranked seventh out of the 50 states and the District of Columbia for access to care — the first time Ohio has ranked in the top quartile on any Health Value Dashboard domain.

While access is clearly a bright spot for the state, the Dashboard found that Ohio’s population health outcomes remain poor. Access to care is critical, particularly for Ohioans with serious health conditions. But the Dashboard and national research shows that health is shaped by many factors, including social, economic and physical environments.

This April, HPIO is creating a series of data graphics in recognition of National Minority Health Month.

Around 3.3 million Ohioans were enrolled in Medicaid this fiscal year as of February, an increase from around 2.8 million from 2020. Under the declaration, Ohio and other states were unable to take people off Medicaid, even if they become ineligible. A new Commonwealth Fund report estimates that as many as 400,000 Ohioans could lose their coverage at the conclusion of the public health emergency.

HPIO is also hosting a free online forum May 3, titled “What’s on the Horizon for Ohio’s Medicaid Program? Innovation, Equity and Unwinding the Public Health Emergency.”

The ban on unexpected charges to insured patients is on track to take effect Jan. 1, officials said.

Patients will no longer have to worry about getting a huge bill following a medical crisis if the closest hospital emergency room happened to have been outside their insurance plan’s provider network. They’ll also be protected from unexpected charges if an out-of-network clinician takes part in a surgery or procedure conducted at an in-network hospital. In such situations, patients will be liable only for their in-network cost-sharing amount.

The rules released Thursday spelled out for the first time a key part of the new system: a behind-the-scenes dispute resolution process that hospitals, doctors and insurers will use to haggle over fees, without dragging patients into it.

The federal Centers for Medicare and Medicaid Services told the Ohio Department of Medicaid this week that it cannot proceed with its plans to require some people on the health coverage program to work to keep their coverage (Source: “Biden administration nixes Ohio’s Medicaid work requirements,” Cleveland Plain Dealer, Aug. 11).

In a 23-page letter, sent to the state on Tuesday, CMS says that work requirements do not “ promote the statutory objectives of Medicaid” because they would likely result in thousands of people losing coverage.

This is a change from the administration of former President Donald Trump, which had approved the state’s work requirements program in 2019. The Ohio Department of Medicaid was directed to submit a work requirement program by the Ohio General Assembly in the 2017 budget bill.

Work requirements were supposed to begin Jan. 1, but were postponed because of the coronavirus pandemic.

The state is overhauling how the health insurance program for people who are disabled or have low incomes operates and picking new insurance companies as contractors to manage those insurance claims. By rebidding the contracts, the state can update the conditions for getting and spending Medicaid dollars and can re-select which insurers it trusts to meet its goals.

In 2019, Ohio paid about $17 billion to Medicaid HMOs and about 90% of the 3 million Ohioans who are covered by Medicaid get an insurance plan managed by an insurance company. These insurers get a payment per member per month and use that money to pay for their member’s health care.

Statements made by Supreme Court justices during the latest challenge to the Affordable Care Act indicate that the law is likely to be upheld (Source: “‘Obamacare’ likely to survive, high court arguments indicate,” Associated Press, Nov. 10).

Meeting remotely a week after the election and in the midst of a pandemic that has closed their courtroom, the justices on Tuesday took on the latest Republican challenge to the Obama-era health care law, with three appointees of President Donald Trump, an outspoken critic of the law, among them.

But at least one of those Trump appointees, Justice Brett Kavanaugh, seemed likely to vote to leave the bulk of the law intact, even if he were to find the law’s now-toothless individual mandate that everyone obtain health insurance to be unconstitutional.

“It does seem fairly clear that the proper remedy would be to sever the mandate provision and leave the rest of the act in place,” Kavanaugh said.

Chief Justice John Roberts, who wrote two earlier opinions preserving the law, stated similar views, and the court’s three liberal justices are almost certain to vote to uphold the law in its entirety. That presumably would form a majority by joining a decision to cut away only the mandate, which now has no financial penalty attached to it. Congress zeroed out the penalty in 2017, but left the rest of the law untouched.

The number of Ohioans enrolled for Medicaid coverage has increased more than 250,000 since the start of the pandemic, according to new state data (Source: “Ohio Medicaid rolls increase during pandemic,” Dayton Daily News, Oct. 29).

The state- and federally funded insurance program as of September covered 3.05 million Ohioans, with the increase primarily from covered families and children, according to the latest data reported by Ohio Department of Medicaid.

The Medicaid rolls have steadily shrunk for years as the economy improved in Ohio. But amid the disruption of the pandemic and related restrictions, many people have lost income and Ohio’s unemployment rate rose to 8.4% in September.

Health insurers will be required to publicly post, in advance, the price for the most common services and procedures, under a rule finalized by the federal Department of Health and Human Services on Thursday (Source: “New Trump policy will force insurers to disclose prices up front,” The Hill, Oct. 29).

Patients will eventually have access to new information about cost, including an estimate of their cost-sharing liability, through an online self-service tool. Currently, this is information that patients typically receive only after they get those services, through an explanation of benefits form.

Beginning in 2022, insurers will be required to make available data files on the costs of various procedures, to better allow for research studies, and to help developers design tools to let patients compare costs across insurance plans. The requirement will take effect for 500 of the "most shoppable" services beginning in 2023, and then for all services starting in 2024.