Since 2019, at least four states — California, Maryland, Michigan and Washington — have adopted policies requiring at least some healthcare workers to take implicit bias training, some as a prerequisite for professional licensure or renewal.

Bills on implicit bias training in health care have been introduced in state legislatures over the past two years in many other states, including Illinois, Indiana, Nebraska, New York, Oklahoma, South Carolina, Tennessee and Vermont. Minnesota passed a law last year requiring obstetrics units to offer implicit bias training.

Even without laws, some health systems in recent years began offering or requiring training in implicit bias, as have some medical schools, including Harvard, Icahn School of Medicine at Mount Sinai in New York and Ohio State University. 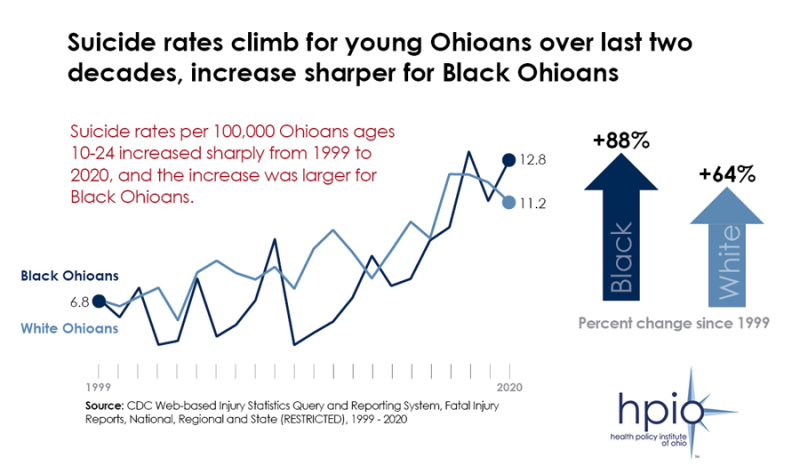 While suicide deaths among young Ohioans have risen overall in Ohio over the past two decades, the increase has been sharpest among Black Ohioans.

More-recent national research indicates that the disparity in suicide rates may have increased during the COVID-19 pandemic.

This April, HPIO is spotlighting health disparities in Ohio as part of National Minority Health Month.

If you or someone you know is experiencing emotional distress or a suicidal crisis, please call the National Suicide Hotline toll-free at 1-800-273-8255.

The federal Department of Health and Human Services Office of Minority Health kicks off National Minority Health Month today with a focus on addressing disparities in vaccination rates.

Although the difference in vaccination rates for Black and white Ohioans persists, the gap has decreased in recent months. According to a national study conducted by Harvard researchers, “lack of access to the COVID-19 vaccine among minority populations in the U.S., rather than lower willingness to receive the vaccine, may have played a greater role in the racial-ethnic disparities we experienced in the early phases of the U.S. vaccination campaign.”

As of March 31, 57% of white Ohioans and 45% of Black Ohioans had completed vaccines for COVID-19 (two doses of either Pfizer or Moderna or one dose of Johnson & Johnson). That gap in vaccination rates has narrowed from a 29% difference between the two groups in November
to a 23% difference as of this week (see graphic above).

As part of its annual recognition of Minority Health Month, the Ohio Commission on Minority Health has released an extensive calendar of events. Throughout the month, HPIO plans to release new data graphics exploring health disparities in the state. More information and resources about health equity in Ohio is available on HPIO’s website.

Posted at 08:46 AM in COVID-19/coronavirus, Health disparities, Health equity | Permalink

Recently released data shows that Ohioans continue to experience substantial financial burdens when paying for housing, and that Ohioans of color are disproportionately impacted.

Last year, HPIO released a fact sheet on housing affordability and health equity that described how stable, affordable and safe housing is critical for good health. Above is a graphic from the publication, updated with the most-recently available data.

The connections between housing and health are clear. Limited high-quality, affor
dable housing stock forces many Ohioans into stressful and unsafe housing situations that can lead to long-term negative health consequences, such as high blood pressure and poor birth outcomes.

HPIO’s fact sheet “Connections between Racism and Health: State and Local Policymakers,” further explains the connection between racism, housing and health: “Decades of racist housing policies, such as historical redlining and present-day predatory lending practices, have resulted in neighborhood segregation, concentrated poverty and disinvestment from Black communities in Ohio that continue to this day. As a result, Ohioans of color are more likely to experience harmful community conditions — such as food deserts and unsafe, unstable housing — that impact health.”

The fact sheet includes action steps policymakers can take to support the health and well-being of Ohioans of color and move Ohio toward a more economically vibrant and healthier future.

The fact sheet is one in a series of three that are companions to the HPIO policy brief “Connections between Racism and Health: Taking Action to Eliminate Racism and Advance Equity.” The other fact sheets in the series address private-sector organizations and individuals and community groups.

The language clinicians use in their electronic health record (EHR) notes varies by patients' race, marital status and type of insurance, according to a new study (Source: “Patients who are Black, unmarried or on government insurance described more negatively in EHR, study shows,” Jan. 19).

The study's authors said their findings raise concerns about racial bias in healthcare and the possible transmission of stigma through the EHR. They said providers may need self-awareness and bias training to change their language.

The Health Policy Institute of Ohio has released a new fact sheet as a companion to its Connections between Racism and Health brief.

The fact sheet, the second in a series of three, outlines actions private sector partners can take to support the health and well-being of Ohioans of color and move Ohio toward a more economically vibrant and healthy future. The first fact sheet provided action steps for state and local policymakers.

“Ohioans of color, in particular, continue to face barriers to good health and well-being that are rooted in racism and centuries of unjust practices,” the fact sheet states. “However, improvement is possible and there are many actions private sector organizations can take to support the health of every Ohioan.”

The number of people who think health disparities and inequities are a problem has waned since 2020, according to new research (Source: “Fewer People Recognize Health Disparities, Inequities as a Problem,” Patient Engagement HIT, Dec. 9).

Robert Wood Johnson Foundation and RAND Corporation researchers saw a significant decline in the number of people recognizing health disparities between July 2020 and September 2021. In July 2020, 61.1% of U.S. adults agreed that people of color faced a disproportionate health impact from the COVID-19 pandemic, and 57.5% agreed people of color faced more of a financial impact than their white peers.

Study: Racial disparities exist in every state in U.S.

Racial and ethnic health inequities are pervasive in every state in the U.S., according to a new analysis that found some of the widest disparities occur within states known for having high performing health care systems (Source: “States Have Large Racial Disparities in Health Care Equity, Study Finds,” U.S. News, Nov. 18).

A new report from the Commonwealth Fund assessed the performance of the health system in all 50 states and the District of Columbia on health care access, quality of care and health outcomes for racial and ethnic minority residents.

Only six states had health systems that scored above the national average for all racial and ethnic groups studied – Oregon, Rhode Island,  Hawaii, Massachusetts, Connecticut and New York. Yet large disparities were also found in those states, where health system performance for white residents was scored the best of any group except in Massachusetts, where it was slightly higher among Asian American, Native Hawaiian and Pacific Islander residents.

Answers sought for rise in suicide attempts among Black teens

Legislators and academics are pushing for better research to understand why self-reported suicide attempts have dramatically risen among Black adolescents over the past three decades (Source: “Why Are More Black Kids Suicidal? A Search for Answers.,” New York Times, Nov. 18).

A study published this summer in the Journal of the American Medical Association found that self-reported suicide attempts rose nearly 80% among Black adolescents from 1991 to 2019, while the prevalence of attempts did not change significantly among those of other races and ethnicities.

One study of high school students, published in September, found that the Black teenagers surveyed were more likely than the white teenagers to have attempted suicide without first having suicidal thoughts or plans. Because suicide screening questionnaires typically ask whether people are having suicidal thoughts or have made plans to hurt themselves, the authors speculated that the questionnaires might fail to identify some Black youths who are at risk of suicide, or that there could be additional factors that might indicate a need for intervention.

More research is needed, but a government study conducted last year suggested that Black children and adolescents who died by suicide were more likely than white youths to have experienced a crisis in the two weeks before they died. They were also more likely to have had a family relationship problem, argument or conflict, or a history of suicide attempts.