A panel of medical experts on Tuesday recommended for the first time that doctors screen all adult patients under 65 for anxiety, guidance that highlights the extraordinary stress levels that have plagued the United States since the start of the pandemic (Source: “Health Panel Recommends Anxiety Screening for All Adults Under 65,” New York Times, Sept. 20).

The advisory group, called the U.S. Preventive Services Task Force, said the guidance was intended to help prevent mental health disorders from going undetected and untreated for years or even decades. It made a similar recommendation for children and teenagers earlier this year.

The panel, appointed by an arm of the federal Department of Health and Human Services, has been preparing the guidance since before the pandemic. The recommendations come at a time of “critical need,” said Lori Pbert, a clinical psychologist and professor at the University of Massachusetts Chan Medical School, who serves on the task force. Americans have been reporting outsize anxiety levels in response to a confluence of stressors, including inflation and crime rates, fear of illness and loss of loved ones from Covid-19. 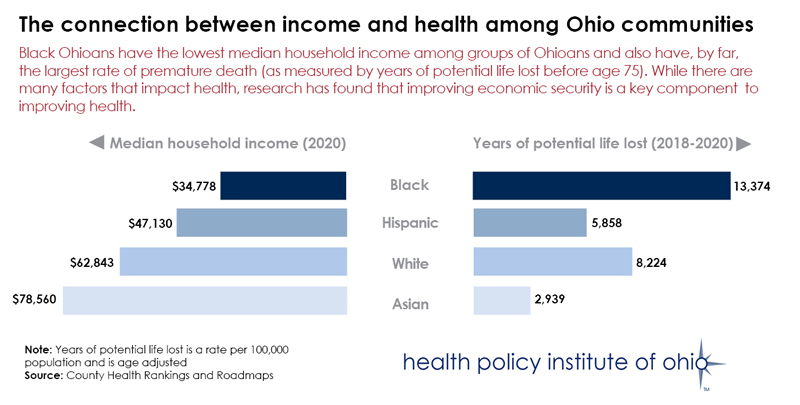 For an overview of harm reduction policy in Ohio, see HPIO’s “Ohio Addiction Policy Scorecard: Overdose Reversal and Other Forms of Harm Reduction.”

Ohio ranks 47 in the nation in health value compared to other states and D.C. according to the latest edition of the Health Value Dashboard, which was released earlier this week by the Health Policy Institute of Ohio.

“Ohioans live less healthy lives and spend more on health care than people in most other states,” according to the Dashboard.

The Dashboard found that Ohio’s healthcare spending is mostly on costly downstream care to treat health problems. This is largely because of a lack of attention and effective action in the following areas:

The Dashboard is a tool to track Ohio’s progress toward health value — a composite measure of Ohio’s performance on population health and healthcare spending. In ranked profiles, the Dashboard examines Ohio’s rank and trend performance relative to other states across seven domains. In addition, through a series of equity profiles, the Dashboard highlights gaps in outcomes between groups for some of Ohio’s most systematically disadvantaged populations.

The Dashboard includes examples of nine evidence-informed policies that could be adopted by Ohio policymakers and private-sector partners to make Ohio a leader in health value.

The Health Policy Institute of Ohio released a new fact sheet titled “Housing Affordability and Health Equity,” which explores the connection between affordable and safe housing and health.

According to the fact sheet, “Quality, affordable housing is vital for Ohio families to maintain stable employment and long-term health. Low wages, a lack of safe and affordable housing and the impacts of racism and housing discrimination result in many Ohioans spending a significant portion of their income on poor quality housing in neighborhoods that are disconnected from necessary resources, including high-quality health care and high paying jobs.”

The fact sheet also includes links to existing state plans and resources that include evidence-based strategies policymakers can focus on to improve housing affordability in Ohio.

The Health Policy Institute of Ohio released a new fact sheet titled “Transit and Health Equity,” which explores the connection between transportation access and health.

According to the fact sheet, “Transportation access is critical for good health across the lifespan.” The fact sheet notes:

The fact sheet also includes links to existing state plans that include strategies for policymakers to consider for improving transit.

The Health Policy Institute of Ohio, in partnership with the Ohio State University College of Nursing Helene Fuld Health Trust National Institute for Evidence-based Practice in Nursing and Healthcare, has released a new policy brief titled A Call to Action: Improving Clinician Wellbeing and Patient Care and Safety.

A growing body of research indicates that healthcare clinicians face serious problems related to their overall health and wellbeing, including high rates of burnout, depression, addiction and suicide. Understanding the relationship between clinician well-being and patient care and safety enables state policymakers and healthcare leaders to implement evidence-informed policies and programs that improve outcomes for clinicians and their patients.

This brief serves as a call to action to improve clinician wellbeing and its impacts on patient care and safety, providing a:

The 2019 County Health Rankings and Roadmap report was released this week, and this year the rankings are focusing attention on the link between health and housing (Source: “Stable housing a key factor in improving health in Ohio’s counties,” Columbus Dispatch, March 19, 2019).

The 2019 County Health Rankings are the ninth iteration of the rankings, with data compiled for every county in the U.S. by researchers with the Robert Wood Johnson Foundation and the University of Wisconsin Population Health Institute.

“We know that a safe and secure and affordable place to call home is a critical foundation for good health,” said Karen Odegaard, an associate researcher at the Population Health Institute.

The cost of housing plays a significant role, especially with low-income families and people of color who are disproportionately burdened, she said.

Housing was one of four focus areas in “A New Approach to Reduce Infant Mortality and Achieve Equity,” a report HPIO published in late 2017 under contract with the Legislative Services Commission.