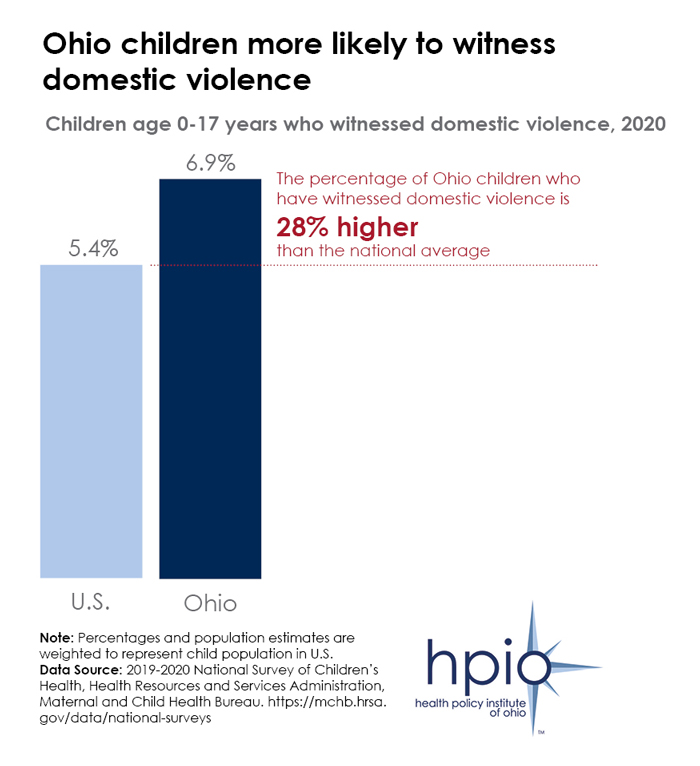 New analysis from the Health Policy Institute of Ohio, conducted as part of Domestic Violence Awareness Month, found that Ohio children are more likely to witness domestic violence than children in the U.S. overall.

In 2020, the most recent year for which data is available, 6.9% of Ohio children witnessed domestic violence, compared to the national average of 5.4% (as displayed in the graphic above). That percentage translates to an estimate of more than 171,000 Ohio children having witnessed domestic violence in their home, according to the National Survey of Children’s Health.

Earlier this week, the Ohio Domestic Violence Network reported that 131 people died from domestic violence in the year ending June 30, 2021. That is a 20% increase in fatalities from the year before and a 62% increase from two years prior.

Witnessing domestic violence is an adverse childhood experience (ACE) that can cause long-lasting harms that persist throughout life. For more information on ACEs and evidence-informed strategies to prevent them, visit HPIO’s Ohio ACEs Impact Project.
Publish
Help and resources are available for victims of domestic violence. The Ohio Domestic Violence Network has a help line at 1-800-934-9840 and the National Coalition Against Domestic Violence has an anonymous 24/7 helpline at 1-800-799-7233 (SAFE). The OhioHealth Sexual Assault Response Network of Central Ohio also provides advocacy and emotional support services.