Black babies in Ohio are born too early and too small — factors that contribute to dying before their first birthdays at a rate twice that of white babies (Source: “Black babies dying at alarming rate: How can their lives be saved?,” Dayton Daily News, March 14, 2021).

While disparities in income and educational attainment play a role, Black mothers with higher incomes and education are still more likely to live in disadvantaged neighborhoods, face biases from health care professionals and toxic stress from racism that erodes health on a cellular level, according to the Health Policy Institute of Ohio. Some research indicates the health impacts of that stress can be passed on.

The Health Policy Institute of Ohio has released a new fact sheet, “The impact of the COVID-19 pandemic on Adverse Childhood Experiences (ACEs).”

The COVID-19 pandemic has resulted in unprecedented health, social and economic challenges for all Ohioans. These challenges are far-reaching, including loss of loved ones, unemployment, business closures, disruption to K-12 education and increased stress and social isolation.

The full extent of the impacts of the pandemic on children and youth will take years to discern. However, early indicators of childhood adversity signal the impact of the pandemic on potential challenges to Ohio’s health, well-being and economic vitality for years to come. The fact sheet includes links to recent reports that provide evidence-informed policies that can be implemented in Ohio to prevent and mitigate the impacts of ACEs and eliminate disparities.

The fact sheet is the latest in a series of HPIO publications and an online resource page to examine the impact of adverse childhood experiences (ACEs) in Ohio. Other publications include:

Over the past half-century, public health officials have made enormous progress in protecting American children from lead poisoning and the irreversible neurological damage it can cause. Since the 1970s, the percentage of children with high levels of lead in their blood has plummeted.

Last month, the Centers for Disease Control and Prevention estimated that in the early months of the pandemic, roughly 10,000 children with elevated levels of lead in their blood may have gone undetected.

There is no safe level of exposure to lead, which can disrupt neurological and cognitive development, causing learning disabilities, behavioral problems and developmental delays.

Ohio’s Child and Adolescent Behavioral Health “Center of Excellence” will offer training and technology and administrative services, including increased access to government support through telehealth. Multiple departments, including the Ohio Department of Job and Family Services and the Ohio Department of Mental Health and Addiction Services, created the request for qualified contractors to help develop the center.

Case Western Reserve University’s Center for Innovative Practices, through a two-year, $3.6 million contract, will organize the creation and operations.

First-of-its kind analysis by the Health Policy Institute of Ohio has found that if adverse childhood experiences (ACEs) are eliminated, more than $10 billion in annual healthcare and related expenses could be avoided in Ohio.

The analysis is included in a new HPIO policy brief, Adverse Childhood Experiences (ACEs): Economic Impact of ACEs in Ohio. The study also found that focusing action on reducing ACEs, particularly those associated with behavioral health, can yield significant savings. For example, more than $4.5 billion in annual spending to treat depression in Ohio is attributable to ACEs.

“The research is clear that ACEs result in both significant health and economic impacts,” the brief states. “Economic costs from ACEs are incurred across the public and private sectors, including substantial costs to the healthcare system. The economic burden of ACEs also impacts the state child protection, behavioral health, criminal justice and education systems, as well as private sector businesses. By preventing and mitigating the impacts of ACEs, policymakers and others can put Ohio on a path towards improved health value.”

A new study has found that although Black newborns are three times as likely to die as white newborns, when the doctor of record for Black newborns — primarily pediatricians, neonatologists and family practitioners — was also Black, their mortality rate, as compared with white newborns, was cut in half (Source: “Mortality rate for Black babies is cut dramatically when Black doctors care for them after birth, researchers say,” Washington Post, Jan. 13)

The new study of births in Florida by University of Minnesota School of Public Health researchers found an association, not a cause and effect, and the researchers said more studies are needed to understand what effect, if any, a doctor’s race might have on infant mortality.

The researchers cautioned that it wasn’t practical for all Black families to seek Black doctors to care for their babies, not only because there are too few of them, but also because the reasons for the disparity in care need to be understood and addressed.

In a New England Journal of Medicine opinion article from July, one of the study’s authors wrote that, “We believe that medical schools and training programs should equip every clinician, in every role, to address racism. And licensing, accreditation and qualifying procedures should test this knowledge as an essential professional competency.”

This could include mandating education about implicit bias and social justice, which can better prepare doctors of any race to properly treat at-risk patients, regardless of their socioeconomic backgrounds or race. Medical schools have come under increasing pressure to include such education and counteract training that in the past wrongly taught doctors that there were genetic differences among different races.

The fact sheet highlights that, “For many years, Ohio’s infant mortality rate has been higher than most other states... Ohio’s policymakers and health leaders have acted on this issue through multiple advisory committees, collaborative efforts, investments, legislation and other policy changes.”

The fact sheet includes troubling infant mortality disparities data (see graphic below) and information on what can drive change and move Ohio forward. It highlights three action steps that are needed to eliminate racial disparities in infant mortality. Future efforts must: 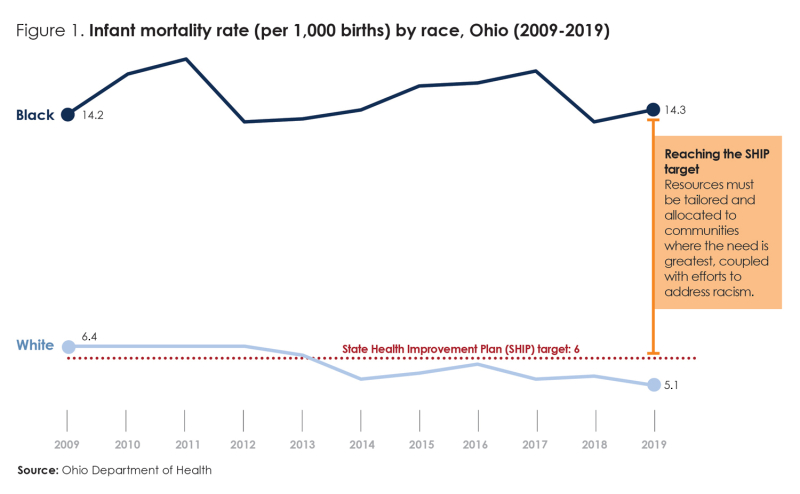 The fact sheet highlights that, “For many years, Ohio’s infant mortality rate has been higher than most other states... Ohio’s policymakers and health leaders have acted on this issue through multiple advisory committees, collaborative efforts, investments, legislation and other policy changes.”

In December 2020, Gov. Mike DeWine announced the creation of a new task force focused on eliminating racial disparities in infant mortality by 2030. The task force will host listening sessions in 11 counties, providing an opportunity for members to learn about promising programs, evaluation results and barriers to improving maternal and infant health for Black families.

The fact sheet includes troubling infant mortality disparities data and information on what can drive change and move Ohio forward. It highlights three action steps that are needed to eliminate racial disparities in infant mortality. Future efforts must:

A new HPIO fact sheet, The Link between Adverse Childhood Experiences (ACEs) and Poor Health, includes first-of-its-kind analysis in Ohio that estimates that 36% of depression diagnoses in Ohio can be attributed to experiencing multiple adverse childhood experiences, or ACEs.

That means that if exposure to ACEs were eliminated among Ohioans, an estimated 36% of depression diagnoses could be prevented.

Similarly, in Ohio, 33% of current smoking, 25% of inability to afford care, 24% of asthma, 20% of chronic obstructive pulmonary disease and 19% of heavy drinking is potentially preventable with the elimination of exposure to ACEs.

Black babies are dying before their first birthday in Ohio at an even greater rate — nearly three times that of white infants — even though the state's overall infant mortality rate was unchanged last year (Source: “Despite years of efforts to combat infant mortality in Ohio, racial disparity increases,” Columbus Dispatch, Dec. 17).

The data released on Thursday in a report by the Ohio Department of Health show that racial disparities are getting worse, despite years of efforts to close that gap and reduce infant mortality.

The report prompted Gov. Mike DeWine to announce the formation of a new task force charged with developing a plan to reduce infant mortality and eliminate the racial disparity by 2030.