The Centers for Disease Control and Prevention on Thursday softened its guidelines for U.S. doctors prescribing oxycodone and other opioid painkillers (Source: “US agency softens opioid prescribing guidelines for doctors,” Associated Press, Nov. 14).

The new CDC recommendations are an update to 2016 guidelines that added momentum to a decline in opioid painkiller prescriptions.

The previous guidance succeeded in reducing inappropriate and dangerous prescribing, some experts say. But they also were seen as a barrier to care, with some pharmacists refusing to fill prescriptions as doctors wrote them.

The new guidelines are designed to ensure that patients get compassionate and safe pain care, CDC officials said.

A draft released in February received 5,500 public comments. Some modifications were made, but several main changes stayed in place, including no longer suggesting limiting opioid treatment for acute pain to three days; dropping the specific recommendation that doctors avoid increasing dosage to a level equivalent to 90 milligrams of morphine per day; and urging doctors to not abruptly halt treatment for patients receiving higher doses of opioids unless there are indications of life-threatening danger.

1 in 8 working-age deaths attributed to alcohol use, CDC study finds

An estimated one in eight deaths of Americans ages 20 to 64 in the years 2015-19 was the result of injuries or illness caused by excessive alcohol use, according to a new study from the Centers for Disease Control and Prevention (Source: “Alcohol Deaths Claim Lives of Working-Age Americans,” New York Times, Nov. 1).

The study was published on Tuesday in the journal JAMA Network Open, assessed the effects of alcohol on people of working age, who accounted for nearly two-thirds of the country’s annual average of 140,000 alcohol-related deaths.

The rates of excessive alcohol use and related deaths have most likely climbed since the period of the CDC analysis. After the onset of the pandemic, a variety of data showed Americans drank more frequently, and deaths due to a narrower set of causes attributable to alcohol rose 25% in 2020 over the previous year.

Alcohol is a leading cause of preventable death in the United States, but it is often overshadowed by tobacco or opiates. And its effects on Americans’ health has been growing. Nearly a decade ago, a similar study found one in 10 deaths of working-age people was due to drinking, although researchers have changed the methodology, so a perfect apples-to-apples comparison is not possible.

This summer, HPIO released a Data Snapshot on death trends among working-age Ohioans.

More than two-fifths of young men and women nationwide now use cannabis at least on occasion, according to federal data released this week (Source: “Marijuana use is becoming a new normal among young adults,” The Hill, Oct. 18, 2022).

The federal study, which was conducted by the University of Michigan’s Institute for Social Research and funded by NIDA, part of the National Institutes of Health, found that much of the trend is driven by young women, who have all but closed a decades-long gender gap in cannabis use.

Already, 19 states and the District of Columbia have recreational cannabis laws on the books. Five more states are poised to join the recreational cannabis movement after the midterms. Should all five measures pass, “legalization would be the law for an estimated 49% of the U.S. population,” said Paul Armentano, deputy director of the National Organization for the Reform of Marijuana Laws, in an email interview.

Last December, HPIO released a policy brief titled Alcohol, Tobacco and Health: Implications for Future Cannabis Policy that lays the groundwork for future cannabis policy discussions in Ohio by applying lessons learned from tobacco and alcohol to inform equitable and effective cannabis regulation in the future.

The new data from the Centers for Disease Control and Prevention seems to show more teens are vaping, with 14% saying they had done so recently, according to survey results released Thursday. In last year’s survey, about 11% said they had vaped recently.

But experts cautioned that a change in the survey makes it difficult to compare the two: This year, a much higher percentage of participants took the survey in schools, and vaping tends to be reported more in schools than in homes.

Despite its persistence, vaping appears to be less popular than it was: In 2019, 28% of high schoolers said they had recently vaped.

Accidental drug overdoses have been the leading cause of death in Ohio since 2007, according to the Ohio Department of Health. In 2020, 5,017 people died of overdoses in the state, a 25% increase over the previous year.

Most of Recovery Ohio funding in 2021, $695 million, was spent on prevention programs and resources for school children.

Posted at 03:31 AM in Addiction, Ohio budget, Ohio policy | Permalink

According to modelling from a Northwestern University researcher, the current rise in opioid deaths is not expected to slow anytime soon, and, in fact, may be a warning for one of the largest death waves due to opioids the country has seen to date, with Ohio potentially on the frontline once again (Source: “Model suggests coming wave of opioid deaths bigger than seen before,” Cleveland.com, Aug. 29).

Those who study opioid addiction refer to overdose deaths as coming in waves. And according to research published at the end of July, we may be headed for a tsunami.

According to data from the Centers for Disease Control, Ohio ranked fourth in the rate of drug overdose mortality in 2020; 75% of those deaths were due to opioid overdose, the CDC found. The overwhelming majority of those — 82% — are synthetic opioids manufactured illicitly, rather than prescription drugs being re-sold on the street.

Lori Ann Post, who studies opioid abuse trends at Northwestern’s Feinberg School of Medicine in Chicago, said the goal of modeling is to get out in front of the problem because by the time all the toxicology reports come back and the data is input into the CDC databases, policymakers are a year behind; it’s too late by then to make the policy changes that are needed.

HPIO created the Addiction Evidence Project to provide policymakers and other stakeholders with the information needed to evaluate Ohio’s policy response to the opiate crisis and accelerate and continually improve strategies to address substance use disorders in a comprehensive, effective and efficient way.

The state is setting up a new education program for financial advisers, to teach them how to better help their clients who are dealing with the impacts of substance use disorder and to pass on information about available resources (Source: “New state program aims to make treatment for substance use disorder more affordable for Ohioans,” Statehouse News Bureau, Aug. 23).

Those on the front lines who are dealing with substance use disorders say families of thousands of Ohioans who go through treatment for it often dip into their retirement savings or destroy their nest egg to access care.

Andrea Seidt, the Ohio Securities Commissioner for the Ohio Department of Commerce said the new state campaign called Recovery Within Reach will include public service announcements on television as well as digital ads. And she said resources are now available on a state website,
RecoveryWithinReach.Ohio.gov, including a map that shows where treatment is available and gives a variety of payment options for those services. 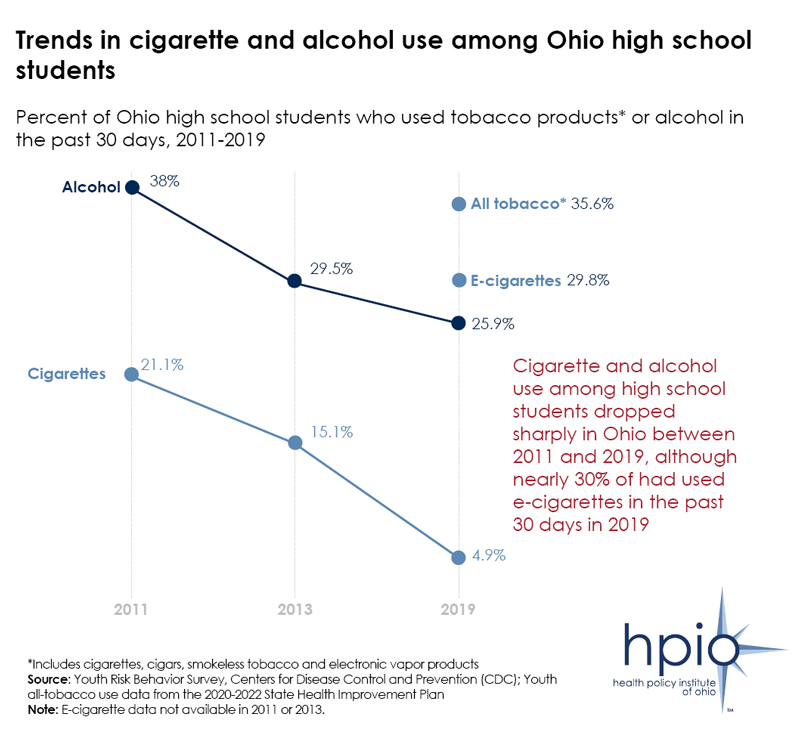 Analysis from HPIO late last year found that the most notable change in tobacco use in recent years has been the shift away from combustible cigarettes and toward e-cigarettes among teens and young adults (see graphic above). By 2019, only 4.9% of Ohio high school students reported that they had smoked a cigarette in the past 30 days, while e-cigarettes surpassed alcohol and became the most commonly used drug among teens. Similarly, the percent of 18-24-year-olds reporting e-cigarette use jumped 77% from 2016 to 2020, making this the group of adults with the highest rate of e-cigarette use in 2020 (19%).

Posted at 03:05 PM in Addiction, HPIO news, Tobacco use | Permalink

The FDA order affects all of Juul’s products on the U.S. market, the overwhelming source of the company’s sales. Juul’s sleek vaping cartridges and sweet-flavored pods helped usher in an era of alternative nicotine products that became exceptionally popular among young people, and invited intense scrutiny from antismoking groups and regulators who feared they would do more harm to young people than good to former smokers.

In its ruling, the agency said that Juul had provided insufficient and conflicting data about potentially harmful chemicals that could leach out of Juul’s proprietary e-liquid pods.

The 29-member OneOhio Recovery Foundation Board consists of state representatives, local government leaders, addiction treatment experts and others from around the state. Under an agreement between state and local officials made in 2020, the new foundation will decide how to distribute more than $440 million (or 55%) of an $808 million settlement reached last year with the nation’s three largest pharmaceutical distributors and drugmaker Johnson & Johnson.

Under the agreement, another 30% of the settlement money will get distributed among more than 2,000 local governments in Ohio. The final 15% will go to the state, though Gov. Mike DeWine said OneOhio might also gain control over spending some of the state’s share.