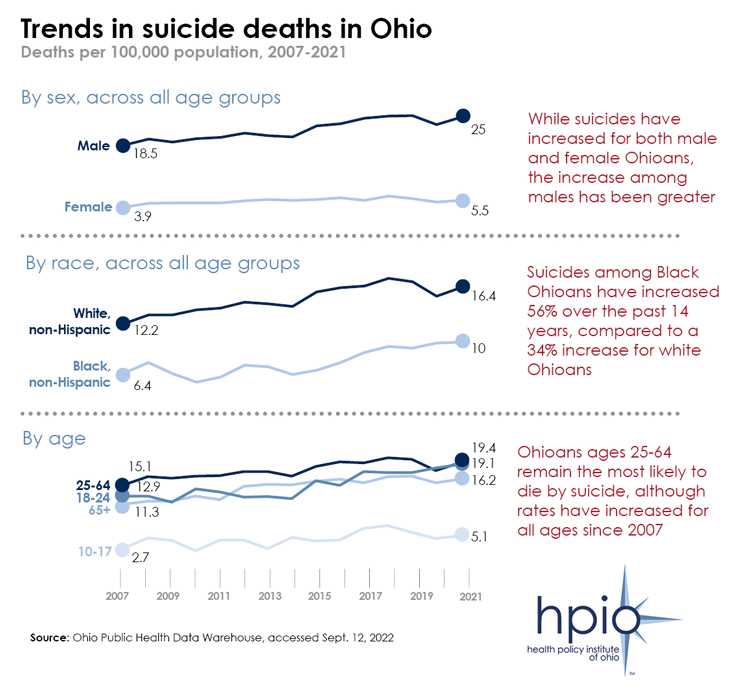 At the conclusion of Suicide Prevention Awareness Month, new analysis from the Health Policy Institute of Ohio details the changing demographic trends in suicide deaths in Ohio (as illustrated in the graphic above).

According to data from the Ohio Public Health Data Warehouse, between 2007 and 2021 (the most-recent year in which data is available), suicide deaths increased for both male and female Ohioans, with a greater increase among males. Suicides among Black Ohioans have increased 56% over the past 14 years, compared to a 34% increase for white Ohioans. In terms of age groups, Ohioans ages 25-64 remain the most likely to die by suicide, although rates have increased for all ages since 2007.

Earlier this month, HPIO released a graphic illustrating how, between 2007 and 2021, the rate of suicide deaths in Ohio that involved a firearm increased by more than 50% and how, in 2021, suicides involving a firearm accounted for more than all other methods combined.

Suicide is preventable and the state’s 2020-2022 Suicide Prevention Plan includes evidence-informed strategies that both public- and private-sector leaders can implement to address the issue.

If you or someone you know is experiencing emotional distress or a suicidal crisis, please call the 988 Suicide and Crisis Lifeline, the Trans Lifeline at 877-565-8860 or the Trevor Project at 866-488-7386. If you don’t like talking on the phone, consider using the Crisis Text Line at www.crisistextline.org or text “4HOPE” to 741-741.