HPIO has launched a series of resource pages that include a collection of graphics and key data points from HPIO publications.

The Institute encourages stakeholders to use data and graphics from its publications in their own work (presentations, reports, etc.). The Facts and Figures pages include suggested citation guidelines.

Initial topics covered in the Facts and Figures pages are:

The new infant mortality rate is "the lowest it has been in the past decade," according to the report, but it's still far above from the 2028 target of 6 or fewer deaths per 1,000 births for every racial group that was set out in the 2020-2022 State Health Improvement Plan.

"Racial and socio-economic inequities persist," the report acknowledged. "The infant mortality rate not only serves as a key indicator of maternal and infant health but is also an important measure of the health status of a community."

ODH plans to update the dashboard each Thursday. Currently, there have been 147 confirmed cases across 19 counties. Cuyahoga County, with 69 cases, has the most, followed by Franklin County, which counts 33 cases.

Just nine people have been hospitalized and no one has died with monkeypox in Ohio thus far.

The state’s first monkeypox case was reported June 13. Cases have increased in Ohio and across the country in the past few weeks.

The state is setting up a new education program for financial advisers, to teach them how to better help their clients who are dealing with the impacts of substance use disorder and to pass on information about available resources (Source: “New state program aims to make treatment for substance use disorder more affordable for Ohioans,” Statehouse News Bureau, Aug. 23).

Those on the front lines who are dealing with substance use disorders say families of thousands of Ohioans who go through treatment for it often dip into their retirement savings or destroy their nest egg to access care.

Andrea Seidt, the Ohio Securities Commissioner for the Ohio Department of Commerce said the new state campaign called Recovery Within Reach will include public service announcements on television as well as digital ads. And she said resources are now available on a state website,
RecoveryWithinReach.Ohio.gov, including a map that shows where treatment is available and gives a variety of payment options for those services.

All three positions would be key members of a highly collaborative team and would support HPIO’s mission to advance evidence-informed policies that improve health, advance equity, and lead to sustainable healthcare spending.

Information about specific responsibilities and qualifications for the positions, as well as how to apply, are posted on HPIO’s website. The deadline for applications is Sunday, Sept. 18, 2022. 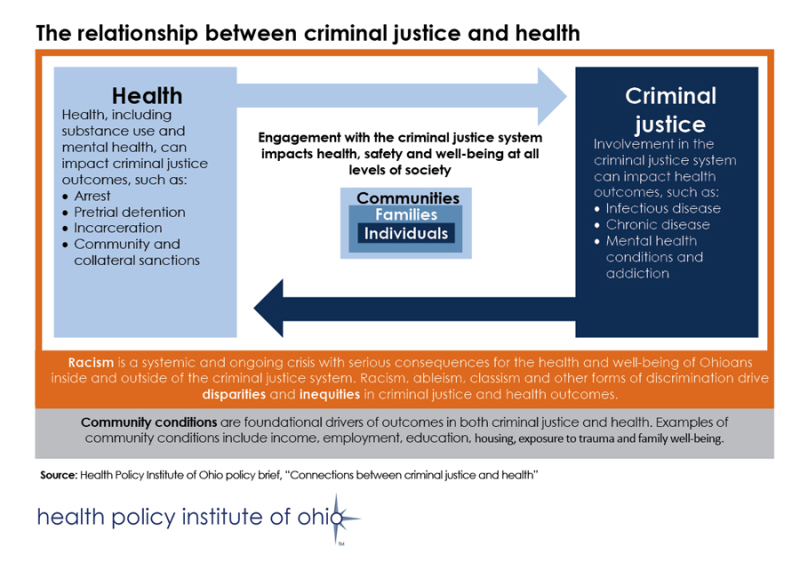 Over the past year, HPIO has explored the connections between criminal justice and health.

The research evidence is clear that poor mental health and addiction are risk factors for criminal justice involvement and that incarceration is detrimental to health (see graphic above).

Obstacles to health and well-being are particularly striking for Ohioans who are at highest risk of criminal justice involvement.

Next month, HPIO plans to release the third in a series of policy briefs on the topic. The latest edition will explore pretrial incarceration and the bail system.

The first brief in the series provides foundational analysis on the connection between criminal justice and health and the second brief explored insights on justice and race.

All briefs in the series include evidence-informed policy options to improve the health, safety and well-being of Ohioans.

Following a series of missteps in the COVID-19 pandemic and monkeypox outbreak, the Centers for Disease Control and Prevention will undergo an “ambitious” overhaul, its director announced Wednesday (Source: “In an effort to address its missteps during Covid, CDC plans an ‘ambitious’ agency overhaul,” STAT News, Aug. 17).

In an email to staff, CDC Director Rochelle Walensky said the renewal effort will focus on making the agency more nimble and responsive to needs that arise in health emergencies. The priority will be to gather data that can be used to rapidly dispense public health guidance, rather than craft scientific papers.

Walensky also said the agency needs to acknowledge the flaws of its response to Covid-19. Those mistakes date to the earliest days of the pandemic, when a test designed by CDC scientists to detect the new disease failed to work on the ground — leaving the country blind to how quickly the SARS-CoV-2 virus was transmitting at a critical juncture when aggressive measures could have slowed Covid’s spread.

“For 75 years, CDC and public health have been preparing for Covid-19, and in our big moment, our performance did not reliably meet expectations,” Walensky said in the email, sent to the agency’s 11,000-person staff.  “My goal is a new, public health action-oriented culture at CDC that emphasizes accountability, collaboration, communication, and timeliness.”

The U.S. Department of Health and Human Services (HHS), through the Centers for Medicare and Medicaid Services (CMS), on Tuesday approved the state’s request to extend the coverage.

“Maternal health is a strong predictor of a child’s health, so by extending health coverage for new moms, we are helping to provide the healthiest possible start in life for Ohio’s children,” said Gov. Mike DeWine.

The American Rescue Plan Act (ARPA) provided the option for states to expand this Medicaid coverage for new moms from 60 days to 12 months. The state of Ohio’s budget included this expanded coverage in its portion of Medicaid funding. DeWine said the state of Ohio began this extended coverage on April 1 and CMS’s final approval is the last step to continuing those services.

COVID survivors remain at higher risk of psychotic disorders, dementia and similar conditions for at least two years, according to a study that highlights the mounting burden of chronic illness left in the pandemic’s wake (Source: “Covid’s Harmful Effects on the Brain Reverberate Years Later,” Bloomberg, Aug. 17).

While anxiety and depression occur more frequently after COVID than other respiratory infections, the risk typically subsides within two months, researchers at the University of Oxford found. In contrast, cognitive deficits known colloquially as “brain fog,” epilepsy, seizures and other longer-term mental and brain health disorders remained elevated 24 months later, according to a large study published Wednesday in the journal Lancet Psychiatry.

The findings, based on the records of more than 1.25 million patients, add to evidence of the virus’s potential to cause profound damage to the central nervous system and exacerbate the global burden of dementia -- which cost an estimated $1.3 trillion in the year the pandemic began. Oxford researchers showed in March that even a mild case is associated with brain shrinkage equivalent to as much as a decade of normal aging.

Data released earlier this year from County Health Rankings show that Black Ohioans have the lowest median household income among groups of Ohioans and have, by far, the highest rate of premature death (years of potential life lost before age 75, which reflects the burden of deaths that potentially could have been prevented).

The latest edition of the County Health Rankings includes a curated list of strategies to address racial wealth building, a key to eliminating health disparities.