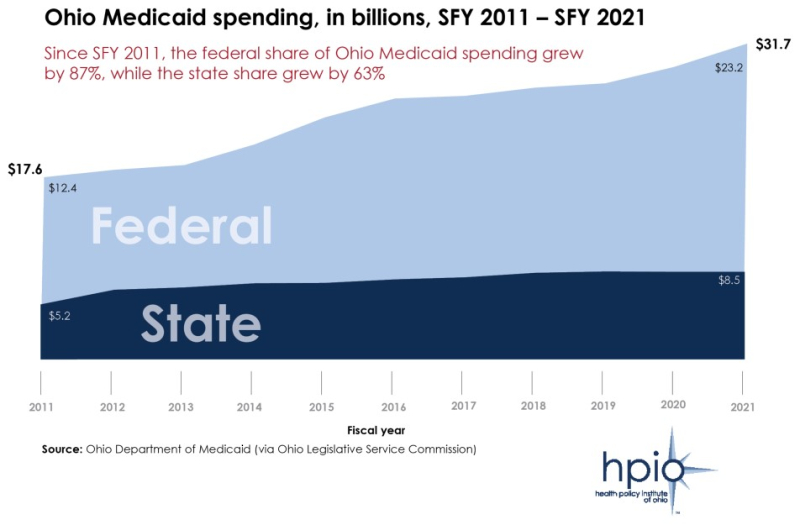 HPIO analysis of Ohio Medicaid data has found that the state share of spending on the Medicaid program has risen at a slower rate than the federal share over the past decade (see graphic above).

The graphic is included in HPIO's fact sheet that was released in April, “Ohio Medicaid Basics Update: Trends in Enrollment and Expenditures During the COVID-19 Pandemic.”

The state recorded 17,530 COVID-19 cases in the past week, down from 19,546 reported last Thursday, according to the Ohio Department of Health (ODH). It was the first time in eight weeks cases dropped.

Hospitalizations have also declined slightly after climbing over the past four weeks. There were 482 cases reported in the last week compared to 506 the previous week, according to ODH. As of Thursday, there were 753 people hospitalized with COVID.

A new study has found that suicide attempts by ingesting toxic substances or overdosing on medications soared by 26% over the past five years among people ages 6 to 19 (Source: “A Growing Number of Young People Are Attempting Suicide by Self-Poisoning,” Time, June 1).

The study published in the journal Clinical Toxicology found that the number of self-poisoning attempts increased in each of the five consecutive years, from 75,000 in 2015 to 93,500 in 2020. During that same time period, there were a total of 514,350 calls to poison control centers involving children ages 6-19 who, according to the control centers’ guidelines for suspected suicide attempts, had “an exposure resulting from the inappropriate use of a substance for self-harm or self-destructive” reasons.

“We began to notice an increase in younger aged children attempting suicide by acute overdoses in our clinical practice at [the University of Virginia Health System],” said Dr. Christopher Holstege, chief of the division of medical toxicology at the University of Virginia School of Medicine and a co-author of the paper, in a statement. “We were disturbed at our institutional numbers and decided to perform research on the national numbers which confirmed that this increase was not just a local issue, but a national issue.”

“The blunt truth is that many communities across our nation – particularly low-income communities and communities of color – continue to bear the brunt of pollution from industrial development, poor land-use decisions, transportation, and trade corridors,” HHS Secretary Xavier Becerra said in the press release. “Meeting the needs of these communities requires our focused attention. That’s why HHS is establishing the Office of Environmental Justice.”

Until June 18, 2022, the OEJ will be seeking public comment to identify the best strategies for addressing environmental injustices and health inequities for disadvantaged communities.