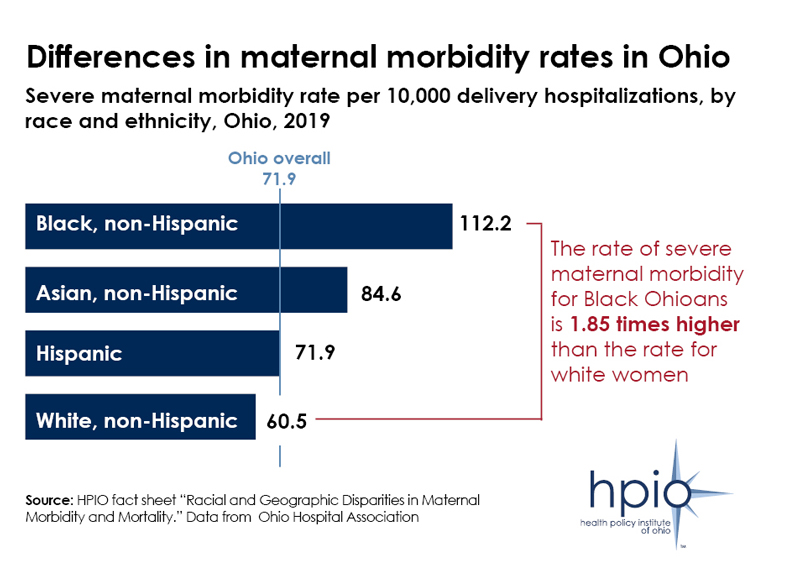 The graphic above, from the fact sheet HPIO released last month titled “Racial and Geographic Disparities in Maternal Morbidity and Mortality,” shows that the severe maternal morbidity rate for Black, non-Hispanic mothers in Ohio was 1.85 times higher than the rate for white women in 2019. Asian, non-Hispanic mothers also have a higher maternal morbidity rate than Ohio mothers overall.

A team of healthcare policy experts is calling for an overhaul of the ways in which Medicaid data is collected and analyzed to address health equity issues (Source: “Health Policy Experts: Medicaid Data Processes Must Be Improved to Achieve Equity,” Heathcare Innovation, May 25).

Writing in Health Affairs, the researchers say that “the COVID-19 pandemic has highlighted and exacerbated health care inequities in the United States. Calls to address health care disparities have intensified, and the Biden Administration has made equity a central component of its policy agenda. The confluence of these social and political forces has reinvigorated discussion about how to address health care inequities in public insurance programs, and refocused attention on Medicaid — which now covers more than 86 million Americans — as a lever for advancing health equity.”

The authors point to the 2021 decision by the Center for Medicare and Medicaid Innovation (CMMI) to explicitly add health care equity as one of its five core objectives. CMMI also specifically prioritized initiatives to improve care and outcomes for vulnerable and underserved populations in Medicaid.

“These efforts depend, however, on the ability to measure disparities in access to care, quality of care, and health outcomes by race and ethnicity,” the authors wrote. “Due to lack of high-quality data, it remains impossible to fully evaluate the state of health equity in the Medicaid program.” 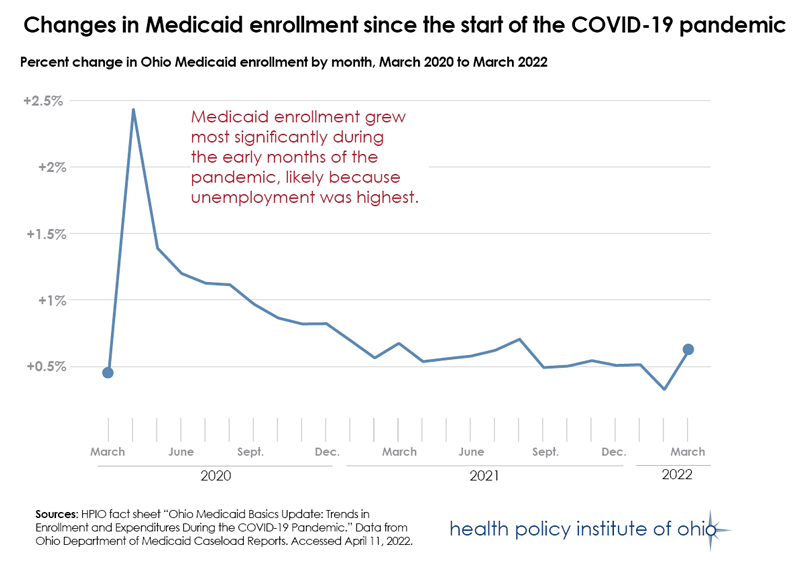 HPIO analysis of Ohio Medicaid data has found that Medicaid enrollment increased by more than 580,000 enrollees between March 2020 (the beginning of the COVID-19 pandemic) and March 2022, an increase of about 20.5%.

As indicated in the graphic above, Medicaid enrollment grew most significantly between April 2020 and August 2020. This is likely because unemployment was highest during the early months of the pandemic, when an economic recession occurred. Since August 2020, growth in Ohio Medicaid enrollment has stabilized, averaging 0.6% growth per month.

The graphic is included in HPIO's fact sheet that was released last month, “Ohio Medicaid Basics Update: Trends in Enrollment and Expenditures During the COVID-19 Pandemic.”

The 29-member OneOhio Recovery Foundation Board consists of state representatives, local government leaders, addiction treatment experts and others from around the state. Under an agreement between state and local officials made in 2020, the new foundation will decide how to distribute more than $440 million (or 55%) of an $808 million settlement reached last year with the nation’s three largest pharmaceutical distributors and drugmaker Johnson & Johnson.

Under the agreement, another 30% of the settlement money will get distributed among more than 2,000 local governments in Ohio. The final 15% will go to the state, though Gov. Mike DeWine said OneOhio might also gain control over spending some of the state’s share.

The Pediatric Behavioral Health Initiative will use American Rescue Plan funds that were allocated in House Bill 168.

Funding has been awarded to:

A year after the Biden administration announced $2.25 billion would be sent to states to address COVID health disparities, little of the money has been used (Source: “States Have Yet to Spend Hundreds of Millions of Federal Dollars to Tackle COVID Health Disparities,” Kaiser Health News, May 16).

The Biden administration in March 2021 announced it was allocating the money to address COVID health disparities, the largest federal funding initiative designed specifically to help underserved communities hardest hit by the virus.

Two months later, the Centers for Disease Control and Prevention awarded grants to every state health department and 58 large city and county health agencies. The money is intended to help limit the spread of COVID-19 among those most at risk in rural areas and within racial and ethnic minority groups, as well as improve their health. The CDC initially said the grant had to be spent by May 2023, but earlier this year told states they could apply to extend that time.

A year after the funding was announced, little of the money has been used, according to a Kaiser Health News review of about a dozen state and county agencies’ grants (Ohio was not included in the analysis). 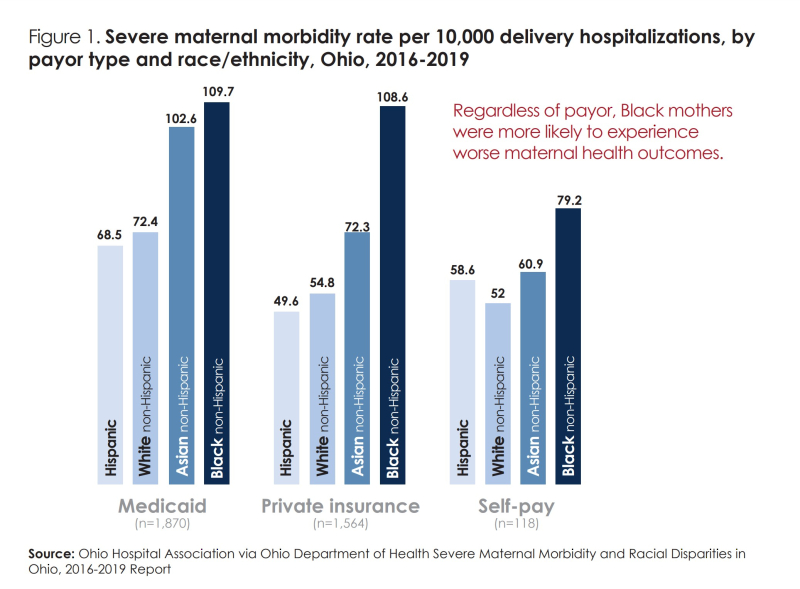 Analysis released by HPIO last month found that regardless of payor, Black mothers were more likely to experience worse maternal health outcomes than mothers of other races (see graphic).

Testing for COVID-19 has plummeted across the globe, making it much tougher for scientists to track the course of the pandemic and spot new, worrisome variants as they emerge and spread (Source: “Pandemic gets tougher to track as COVID testing plunges,” Associated Press, May 10).

Experts say testing has dropped by 70% to 90% worldwide from the first to the second quarter of this year — the opposite of what they say should be happening with new omicron variants on the rise in places such as the United States and South Africa.

Reported daily cases in the U.S., for example, are averaging 73,633, up more than 40% over the past two weeks, according to data compiled by Johns Hopkins University. But that is a vast undercount because of the testing downturn and many tests are being taken at home and not reported to health departments.