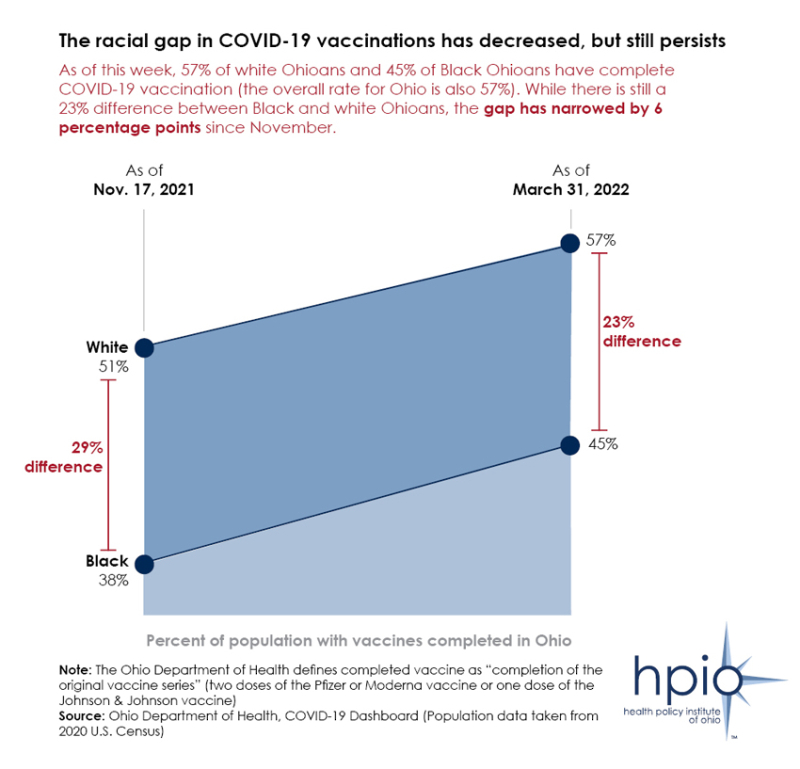 The federal Department of Health and Human Services Office of Minority Health kicks off National Minority Health Month today with a focus on addressing disparities in vaccination rates.

Although the difference in vaccination rates for Black and white Ohioans persists, the gap has decreased in recent months. According to a national study conducted by Harvard researchers, “lack of access to the COVID-19 vaccine among minority populations in the U.S., rather than lower willingness to receive the vaccine, may have played a greater role in the racial-ethnic disparities we experienced in the early phases of the U.S. vaccination campaign.”

As of March 31, 57% of white Ohioans and 45% of Black Ohioans had completed vaccines for COVID-19 (two doses of either Pfizer or Moderna or one dose of Johnson & Johnson). That gap in vaccination rates has narrowed from a 29% difference between the two groups in November
to a 23% difference as of this week (see graphic above).

As part of its annual recognition of Minority Health Month, the Ohio Commission on Minority Health has released an extensive calendar of events. Throughout the month, HPIO plans to release new data graphics exploring health disparities in the state. More information and resources about health equity in Ohio is available on HPIO’s website.

Posted at 08:46 AM in COVID-19/coronavirus, Health disparities, Health equity | Permalink